David Lloyd was the Chairman of the Latin Mass Society when I became the Representative for the Middlesbrough Diocese about 20 years ago. He lived in Holywell in North Wales, and had been a active member since the early days of the Society.  David died the other day, and here is some information about Requiem Masses for the repose of his soul.

A few of you have asked to be informed when arrangements have been made for a Requiem for David Lloyd, former Chairman and Secretary of the LMS.

A Sung Requiem Mass will be celebrated at 6.30pm, Monday 13th February in Corpus Christi, Maiden Lane, in London. The Society hopes to organise another in SS Peter & Paul and St Philomena in the Wirral: to be confirmed.

We have tried to organise a Requiem for Pope Benedict XVI, in conjunction with Brompton Oratory, but Cardinal Nichols has refused permission for this to take place. In response to the request, he wrote: ‘You will understand that the provisions laid down by the Holy See allow me to give permission for the use of the 1962 Missal in response to the pastoral need of a Stable Group of people. Requests from the Latin Mass Society do not fall into this category…’

This is why the Requiem for David will take place in the context of one of our long-established weekly Masses in Maiden Lane.

It is extraordinary that Cardinal Nichols should not regard the Latin Mass Society as a stable group.

Posted by Et Expecto at 2:12 pm No comments:

It seems that in the Diocese of Cheyenne, which is in the USA, the bishop is taking a hard line on the implementation of Traditionis Custodes. 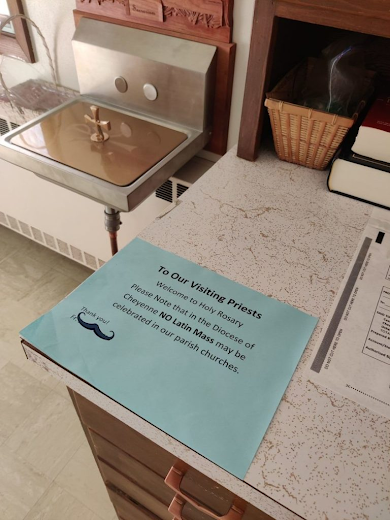 We must be grateful that the majority of the Bishops of England and Wales have been more charitable.  In fact, the Diocese of Clifton is the only one where "Latin Masses" are outlawed.
Posted by Et Expecto at 4:08 pm No comments:

Thursday 2nd February is the Feast of the Purification of Our Lady, and the Presentation of Our Lord in the Temple, otherwise known as Candlemas.  There will be the blessing of candles and procession at 6pm at the York Oratory.  This will be followed by a Sung Latin Mass.
Posted by Et Expecto at 3:42 pm No comments:

A Solemn Requiem Mass will be offered for the repose of the soul of Pope Benedict XVI at the York Oratory on Friday 13th January at 6pm.  The setting of the Mass will be  Victoria's Missa pro Defunctis for four voices. 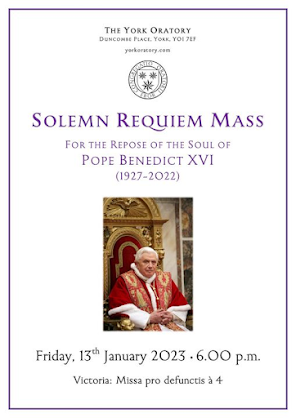 Posted by Et Expecto at 2:37 pm No comments:

The Sister Adorers of the Royal Heart of Jesus Christ Sovereign Priest has announced that a further nine postulants joined the order in  December.  The new members of the order  come from the United States, Nigeria, Italy, France, Germany, Mexico and Argentina, and bring the total membership of the order to over 70.  Here are the new postulants at the order's noviciate in Naples. 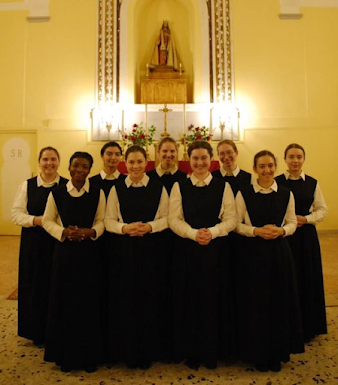 It is interesting that three countries (Nigeria, Mexico and Argentina) are represented where the Institute of Christ the King does not have a pastoral presence.  The order, which at one time was dominated by French and American nuns, is becoming increasingly international.  I believe that it has three English and two Irish members.

A Quotation from the Writings of Pope Benedict XVI 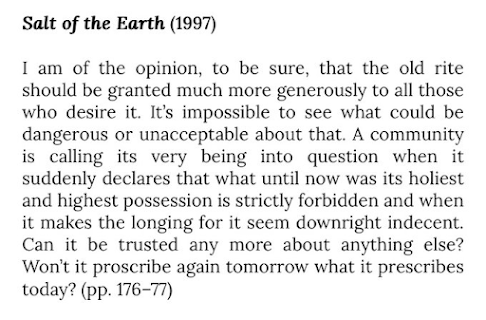 Feast of the Epiphany

Friday 6th January is the Feast of the Epiphany.  In  the Diocese of Middlesbrough, there will be the following Latin Masses:

The Mass at Stokesley will be the last Latin Mass offered in the parish by Fr Charlton.  I am sure that all readers would like to join me in wishing him a long and happy retirement.

I remind readers that, starting on Sunday 8th January, Fr Sellers will be offering a Latin Mass on Sundays at 3pm in the Church of St Andrew in Teesville.  Please consider giving this Mass your support.

Posted by Et Expecto at 5:31 pm No comments:

Archbishop Georg Ganswein, who was private secretary to Pope Benedict throughout his papacy and retirement, as well as during his time as the Prefect of the Congregation for the Doctrine of the Faith, has given an interview to a German Catholic newspaper.  The interview is available as a video, and has been posted on the Rorate Caeli website.

Unfortunately for me, it is conducted in German, which is a language that I do not understand, but I understand that  Archbishop Ganswein states that when the Pope Emeritus read Traditionis Custodes, it broke his heart.

No doubt a translation of the interview will emerge before long.

Posted by Et Expecto at 2:22 pm No comments:

Latin Masses at Stokesley over the Christmas Period

Fr William Charlton will be offering the following Latin Masses at the Church of St Joseph in Stokesley:

Fr Charlton will then be retiring and will not be offering any further Latin Masses at Stokesley.

Instead, Fr Sellers will be offering Sunday Latin Masses at 3pm in the Church of St Andrew in Teesville, Middlesbrough.  These will start on 8th January.

Christmas at the York Oratory

The times of Latin Masses at the York Oratory over the Christmas period are as follows:

There will be NO Latin Mass at midday despite being a Sunday.

During the Christmas Octave     Daily at 9.15am