Wednesday 2nd March is Ash Wednesday.  Ashes will be blessed and distributed at a Missa Cantata at 6pm in the York Oratory.

According to the listings in Mass of Ages, the quarterly magazine of the Latin Mass Society, the average number of Latin Masses offered on Sundays in England and Wales over the coming three months is 63.  This is one up on the previous quarter, and is the highest number ever reported.

It seems that the only casualty that can directly be attributed to Traditionis Custodes, so far as Sunday Masses is concerned, is in the Diocese of Clifton, where Bishop Lang ordered the cancellation of the Mass in Glastonbury.

Another casualty has been the cancellation of the proposed Confirmations in the traditional rite, that were to take place at St James, Spanish Place in London.  However, there is good news that might mittigate this set back.  Pope Francis has confirmed to the Priestly Fraternity of St Peter that they are free to use the Pontifical (the book containing the rite of Confirmation in the traditional form) in their churches.  It seems that this permission applies also to all the Ecclesia Dei communities, so the possibility of traditional confirmations exists in at least five dioceses.

Generally, reports from around the country suggest  that attendance at Latin Masses is continuing grow.  So overall, Traditionis Custodes has had little impact.  My impression is that it has given a minor boost to the traditional movement.

Posted by Et Expecto at 1:28 pm No comments:

Why the Latin Mass will Continue to Prosper

The picture below  was taken at St Patrick's Oratory, the Church of  the Institute of Christ the King in Green Bay, Wisconsin, USA.  It shows 17 of the 36 babies baptised  at that church during 2021. 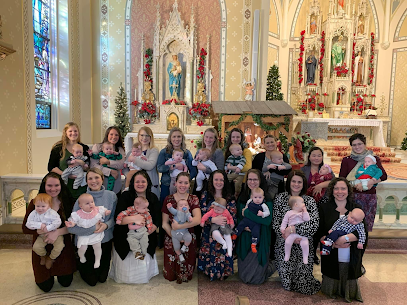 Any congregation with 36 baptisms in a year is surely growing.  Just think how much larger the congregation will be in, say, ten years.  This is a demographic trend that Traditionis Custodes cannot conquer.  The Latin Mass will not only survive all attempts to extinguish it, but it will thrive, especially in Green Bay.
After seeing this photograph, surely the appeal of the Traditional Mass to young people, especially young families, could not be denied by anyone.
Posted by Et Expecto at 5:53 pm No comments:

There is a petition circulating in which it is hoped to get one million signatures to a letter to Pope Francis appealing to him to allow the preservation of the Latin Mass throughout the world. Unfortunately, I am not clever enough to provide a direct link, but the petition is easily found by typing Preserve the Latin Mass into any search engine.

Please consider signing it whether or not you are a regular attender at the older form of the Mass.  I know that there are many who do not personally favour the Latin Mass, but who do think that the the current attempt to get it removed from our churches is both uncharitable and illiberal, and therefore should be resisted.

PLEASE SIGN IF YOU HAVE NOT ALREADY DONE SO

Posted by Et Expecto at 3:30 pm No comments:

A Latin Mass in the traditional form is offered at 3pm every Sunday at the Church of St Joseph in Stokesley.

The church has a chequered history.  Opened in 1873 to a design provided by George Goldie, it could be described a a small church built to a modest budget.  It suffered from a disastrous fire in the 1970s that destroyed the roof, and much else.  A new roof was provided and the internal arrangements were altered so that the altar was in the middle of the south (liturgical) wall.

In recent years, the original orientation has been restored, which is a huge improvement. 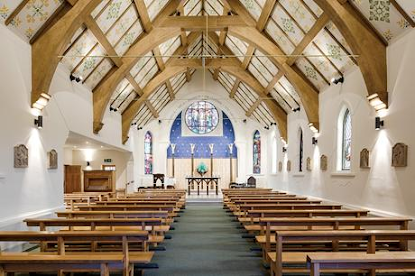 Posted by Et Expecto at 5:31 pm No comments:

Seen in the Streets of Chicago

This truck, which has been photographed in Chicago, has an uncompromising message.  The gentleman in the red biretta is Cardinal Cupich, the Archbishop of Chicago, who has imposed Draconian measures to restrict the Latin Mass in his diocese, including banning it on the first Snday of every month. 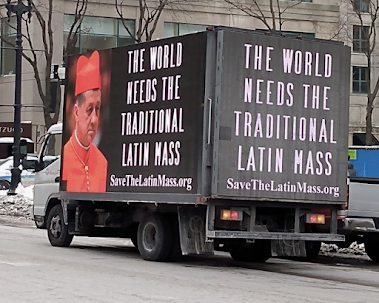 Posted by Et Expecto at 3:52 pm No comments:

How Things Used To Be

The photograph below was taken in the 1950s, and shows ordination day at the Seminary of Saint Sulpice in Paris.  You can count 66 ordinands in the picture, and there are clearly more outside the view of the camera. 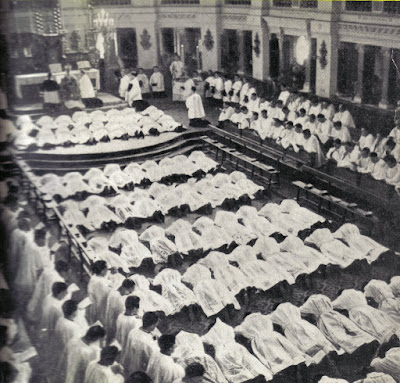 This seminary might have served about five dioceses in the Paris area, which suggests an average of 13 or more ordinations per diocese.  Nowadays, an average French diocese has about two ordinations each year.  A more alarming statistic is that 60% of French Dioceses will have no ordinations this year.
Posted by Et Expecto at 11:15 am No comments:

I first came across Fr James Mawdsley around the year 2000.  At that time, he was in the news as a campaigner against the repression of the tribal people of Burma by their government. Many years later I met him in completely unrelated circumstances, and discovered that he was about to start training to become a priest of the Priestly Society of St Peter.  After studying at Wigratzbad, he was ordained in Warrington in 2016, and has served the FSSP, mostly in Austria and Germany.

Recently, he has hit the headlines again.  He has embarked on a new campaign to fight the attempt by Pope Francis to curtail and eventually eliminate the Latin Mass.  In order to be free to take on this cause, and not to cause the FSSP embarrassment, Fr Mawdsley has resigned from the order.

He has now released a video, which can be found on the Remnant and on Fr Z's blog as well as several other places.

Below is a report taken from en.news that states that a Brazilian archbishop will on 19th February be conducting a priestly ordination according to the Pontificale Romanum.

Archbishop Fernando Guimarães, 75, the Military Ordinary of Brazil, will ordain a priest for the Good Shepherd Institute on February 19 in Brasilia, Brazil.

He will use the Pontificale of 1962 of which Francis and his Liturgy Congregation believe that it is “forbidden.” The Institute announces the ordination of Abbé Thiago de Oliveira Pino “with joy.” The whole Church rejoices with them.

This news, if correct, is important for two reasons.  Firstly, it involves an archbishop disregarding the Responsa ad Dubia issued by Archbishop Roche of the Congregation for Divine Worship.   Secondly, it indicates that Institute of the Good Shephard, one of the three largest orders of traditional priests, intends to continue ordaining priests in the traditional rite.