More on the Mass at York Minster

You have seen the pictures, now for the words.

We did not know how many people would come to York for the pilgrimage in honour of St Margaret Clitherow. We thaught that there would be more than 200, and perhaps up to 500. Although we were unable to count the numbers at Mass in York Minster, we now think that there were around 750. As the choir section of the Minster filled up, vergers were busy bringing in more chairs, increasing the capacity from 500 to about 600. Even this was not enough, and a further 150 had to sit in the nave , where they had no view of the Mass.

The Rudgate Singers sang Byrd's Mass for Five Voices and a schola sang the propers from the Liber Usualis. All reports speak very favourably of the singing. We were very lucky to have an excellent singer in Father Stephen Maughan as the celebrant.

I was especially pleased that the majority of the congregation stayed to take part in the procession through the busy parts of York to the Church of the English Martyrs. The distance of a mile and a half must have been taxing for some. There was a capacity congregation of about 500 for Benediction offered by Father Michael Brown and veneration of the hand of Margaret Clitherow. Again, the Rudgate Singers provided the singing.
Posted by Et Expecto at 4:01 pm No comments:

The first sung Latin Mass at the High Altar of York Minster since the reign of Mary Tudor.

Feast of the Annunciation

On Friday 25th March, there will be an evening Mass at 6.30pm at the church of the English Martyrs in York. This is, of course, the day before the big pilgrimage in York.
Posted by Et Expecto at 6:23 pm No comments: 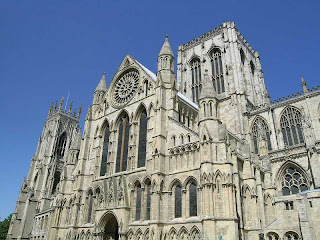 Arrangements for the pilgrimage in honour of St Margaret Clitherow are now well advanced. There will be coaches from London and Leeds, and a party will be travelling by train from London. There is also news of people coming from Oxford, Shrewsbury and Lancashire.

We will need a good crowd to fill York Minster, so please come and encourage others to come. If travelling by car, it may be convenient to uses the Park and Ride service at Askham Bar on the Tadcaster side of York.

There will be blessing and distribution of ashes on Ash Wednesda, 9th March, in both York and Middlesbrough.