Late on Sunday evening I returned home after attending the Latin Mass Society's walking pilgrimage to Walsingham.  It took place over three days, and about 160 pilgrims made the journey on foot from Ely to Walsingham, a distance of 56 miles. A few, like myself, did not walk, but provided support services such as catering.  My principal duty was as sacristan, setting up for four Masses each day, and transporting all the requisites between the four locations.  This is a picture of the post-pilgrimage Mass at the Slipper chapel on the Monday. 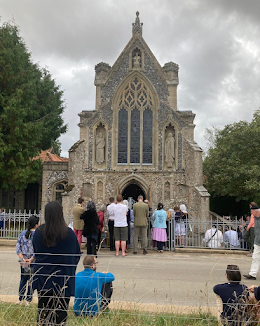 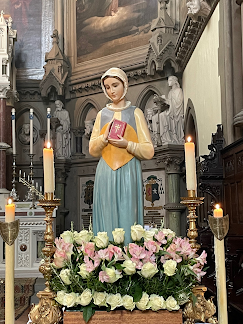 Both events were a great success, and I would encourage anyone who is fit enough to attend one consider attending at least one of them next year.

Monday 15th August is the Feast of the Assumption.  Although most of the modern Church will be celebrating the feast on Sunday, there will be a Sung Mass at the York Oratory at 6pm on the Monday.

There will also be First Vespers of the Feast and Benediction at 4pm on Sunday.

Posted by Et Expecto at 9:06 am No comments:

Chairman's Address to the AGM

The Annual General Meeting of the Latin Mass Society took place in London on 30th July.  Unfortunately, it was difficult for people from Yorkshire to attend due to rail strikes.  Readers may like to listen to the chairman's address by clicking on the link below.

Posted by Et Expecto at 9:00 am No comments:

This is a picture of a policeman on duty in Charlotte, North Carolina.  He is kneeling whilst a Eucharistic procession passes. 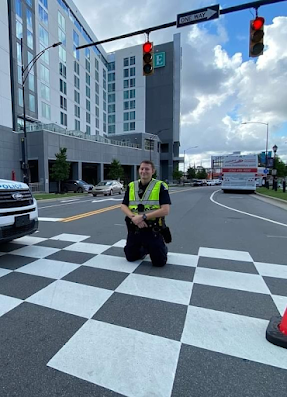 Posted by Et Expecto at 8:20 am No comments: