Latin Vespers and Benediction in Gateshead

Latin Vespers and Benediction in Gateshead

Solemn Vespers will be sung in St Joseph’s, Gateshead, on the Feast of St Joseph. This will be the first occasion that Solemn Vespers have been sung in the Diocese of Hexham and Newcastle since the liturgical changes were introduced in the 1960s.
Vespers - sung by the parish men’s Schola and the Westland Singers under the direction of Paul Dewhurst - will include a setting of the Magnificat by Orlando de Lassus, followed by Benediction of the Blessed Sacrament, with music by Elgar and Perosi.
Officiant: Fr Paul Zielinski. Cantors: Fr Michael Brown and Fr David Phillips.
Thursday 19th March 2020 at 7pm. St Joseph’s Church, High West Street, Gateshead NE8 1LX.
The LMS is delighted to be sponsoring this event. Everyone is most welcome. A poster advertising the event can be downloaded HERE.
Posted by Et Expecto at 10:51 am No comments:


This is a a reminder that there is an Extraordinary Form Mass at 7.30pm on Thursday evenings at the Catholic Chaplaincy of Hull University.  It is celebrated by Fr William Massie and currently attracts a congregation of a dozen or more.

I am pleased to report that the proportion of students at this Mass, although a minority, is increasing.  This is further evidence of the popularity of the Traditional Mass among young people.
Posted by Et Expecto at 2:07 pm No comments:

Wednesday 26th February will be Ash Wednesday and the start of Lent.  As usual there will be a Solemn Mass with the blessing of Ashes at 6pm at St Wilfrid's Church in York.
Posted by Et Expecto at 3:59 pm No comments:


There will be a Solemn Mass of Thanksgiving for the establishment of the York Oratory on Saturday, 22 February at 12 noon, celebrated by Bishop Terence Patrick. Bishop Robert Byrne of Hexham and Newcastle will be the preacher. Our Fr Procurator, Fr Michele Nicolis of the Verona Oratory, will read the Papal Brief and will be accompanied by the Oratorian Fr Visitor, Fr Marco Guillén of the Toronto Oratory.

This Mass will be in the Novus Ordo, but nevertheless it is to celebrate a great achievement, and will be well worth attending.
Posted by Et Expecto at 3:56 pm No comments:


According to a Polish website, more than one in four of the ordinations of diocesan priests occurring in Europe take place in Poland.  The following is an extract from the website.


One in four ordainments of Catholic diocesan priests in Europe takes place in Poland, according to data from the Polish Institute for Catholic Church Statistics.

Around 350 new Catholic priests have been ordained annually in Poland in the last few years, representing 26% of the total number in Europe, which was 1,272 in 2017, the last year for which data are available. The total number of ordainments worldwide in 2017 was 5,800.


These figures relate only to diocesan ordinations.  It may be that the figures for the total number of ordinations would produce a different result.  Nevertheless, these are surprising figures.
Posted by Et Expecto at 10:28 am No comments:


St Wilfrid's Church in York, the York Oratory, has a peal of 10 bells that are expertly rung by St Wilfrid's Bellringers before Masses on Sundays, Feast Days and on special occasions.  Although the Church of St Wilfrid was opened in 1864, the bells were not installed in the tower until 1995.

Recently, an additional bell has been installed in the tower and it was blessed by Bishop Byrne.  The new bell has been given the name "John Henry", but it formerly belonged to Trinity House, and was used to warn shipping of dangerous rocks in the English Channel.

John Henry will sound the Angelus daily at noon and 6pm.  Unlike the main peal, it will be operated remotely by the press of a button.

Meanwhile, the bell at Shrewsbury Cathedral, originally cast in 1856, but silent for the past 50 years,  is being brought back into use.  It too, will be operated remotely at the press of a button. 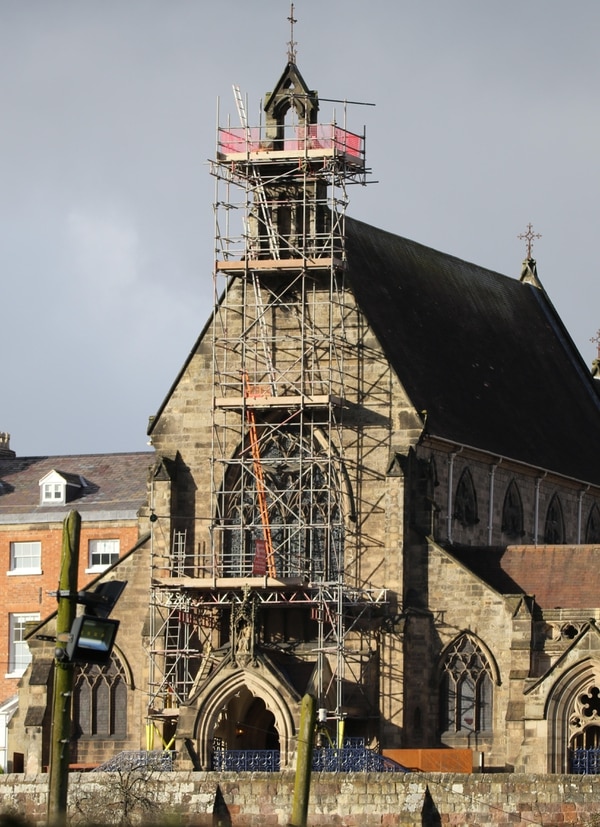 Bell being installed at Shrewsbury Cathedral
Posted by Et Expecto at 1:05 pm No comments:

The Institute of the Good Shepherd


I was interested to read in the latest edition of Mass of Ages that the Institute of the Good Shepherd now have a priest stationed in England.  He is a Frenchman, Fr Xavier Champagne, and is based at Lanherne in Cornwall where he is chaplain to a community of Carmalite nuns.


Fr Champagne also says a Sunday Mass at the Church of St Edward the Confessor in Plymouth.

The Institute of the Good Shepherd is a Society of Apostolic Life that only celebrates Mass in the Usus Antiquior, and is much like the FSSP and the ICKSP.  They were founded in 2006, much later than the other two, but have grown at an impressive rate.  They now have nearly 40 priests and 30 seminarians, including one Englishman

Feast of the Chair of St Peter Saturday 22nd February

In addition to the regular Masses already publicised here, there is to be a Missa Cantata for the Feast of the Chair of St Peter in the church of St Mary, Bishophill Junior, York (YO1 6EN) at 5pm. This Mass replaces the Divine Worship Missal (Ordinariate Use) Mass that would normally be said at that time.

Music to be sung by the Rudgate Singers includes Domenico Scarlatti's Missa quatuor vocum and the motets 'Tu es Petrus' (Frédéric Debons), 'Anima mea (Martin de Rivafrecha) and 'Ave Regina Caelorum (Francesco Soriano)
The Proper of the Mass will be sung from the 1908 Vatican edition of the Graduale Romanum.

All welcome!
Posted by Mike Forbester at 4:05 pm No comments: