Last Sunday, the Feast of Christ the King, I visited St Walburge's Church in Preston for the 10.30am Mass. This was one month after the Institute of Christ the King took charge of the church, and I was interested to see how they were getting on. There were over 50 in the congregation, which, in most churches would be a reasonable congregation, but in the vast space of St Walberge's looked sparce. However, there seemed great enthusiasm amongst those who were there, and there is the expectation that the congregation will grow as the Mass becomes better known. It seems that the local parishes are reluctant to include information about thr Institute in their bulletins. 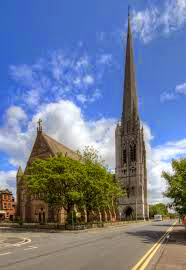 The Mass was beautifully sung by Canon Altieri and well worth travelling nearly 100 miles to attend. The only weakness was with the choir. Deacon Tanner, currently the only English seminarian with the Institute, was playing the organ and trying to sing at the same time. Deacon Tanner was on loan from New Brighton where he is serving his diaconal year, so cannot be the reguylar organist. A choir of sorts was assembled, but there was not much volume coming from them, and a church of that size needs powerful singers. The good news is that, after the Mass, two members of the congregation offered their services as singers, but some really good singers are needed as well as a regular organist.
Posted by Et Expecto at 1:17 pm 6 comments:

There will be usus antiquior Masses at St Wilfrid's Church in York at the following times around the feasts of All Saints and All Souls. 6pm Friday 30th October Vigil Mass of All Saints 5pm Sunday 2nd November External Solemnity of All Saints 6pm Monday 3rd November Requiem Mass for All Souls.
Posted by Et Expecto at 11:08 am No comments:

Change to Time of Latin Mass in York

Changes to the times of the Sunday Masses At St Wilfrid's Church in York have been announced. As from the first Sunday of Advent (30th N0vember), the Extraordunary Form Mass will move from 5pm to 12 noon. It will continue to be a Sung Mass, but will not be followed by Benediction. It is hoped that people will find this a more convenient time, and that the congregation will increase from the current level of about 50. A new introduction will be traditional Vespers at 6pm on Sundays which will be followed by Benediction.
Posted by Et Expecto at 6:41 pm No comments:

More Good News from the Dome of Home

The Church of Ss Peter, Paul and Philomena in New Brighton has been awarded a second grant from the Heritage Lottery Fund. This time it is for a scheme valued at £250.000 that will complete the insulation and weatherproofing of the building and include making good the internal plaster work damaged by years of water ingress through the roof. The scheme also includes the making of a community area in the narthex by providing a glass screen beneath the choir loft. This area will have a live screen link to a webcam mounted on the roof which will be able to show views of Liverpool bay. The first £39,800 of the grant is available for the development stage of the project. This grant from the HLF follows an earlier grant for a £290,000 scheme, under which most of the waterproofing and insulation was carried out.
Posted by Et Expecto at 4:51 pm No comments: