I notice from  the statistics that this blog is being widely read in Sweden.  Of the 654 viewings of the past seven7 days, 346 originate in Sweden.  Less surprisingly, the next largest county of origin is the USA.

The Latin Mass in the Wider World

It has been widely reported that Pope Francis has been in communication with the Italian Bishops' Conference concerning issues associated with the Latin Mass.  Whilst nothing official has emerged, there is little doubt that there is substance behind these reports.

We understand from several reports that the Vatican has prepared a document that would limit the application of Pope Benedict's motu proprio, Summorum Pontificum.  It seems that it was discussed at a closed session of the Italian Bishops' Conference.  Although the content of the document is not known, enough has leaked out for there there to be concern amongst the traditional community.

It must be emphasised that what follows is speculation. However, it seems probable that this new document is a follow up to the recent survey conducted by the Congregation for the Doctrine of the Faith about the reception of the Extraordinary Form throughout the dioceses of the world.  It also seems likely that the document contains a proposal to curb the expansion of the Latin Mass.  Possibly, bishops would be given greater powers to regulate Latin Mass provision in their dioceses.

Although Summorum Pontificum gave every priest the right to choose which Form of the Mass to use, the reality is that very few priests are free to chose.  They are not insulated from pressures from both their congregations and their bishops.

So how might a restriction imposed by Pope Francis work out?  In England and Wales, I doubt whether there will be much impact.  Some bishops acknowledge the need to provide Latin Masses, others don't.  This is likely to remain the case, so provision of Latin Masses will continue to vary from diocese to diocese.  The Orders of priests that are dedicated to the Latin Mass will continue to expand, and will find homes in dioceses where they are welcomed.

I think the same can be said for other parts of the world where the Latin Mass has at least a foothold.  This would include most of Europe and America.  Elsewhere the impact might be greater.  However, I am confident that the Latin Mass is here to stay and its availability will continue to grow with its greater popularity.

The Vatican has announced today that Archbishop Roche, formerly Bishop of Leeds, has been appointed to the post of Prefect of the Congregation for Divine Worship and the Discipline of the Sacraments.  He was Secretary of that Congregation.

Those who favour the Latin Mass can take some comfort from this appointment, because Bishop Roche was helpful in facilitating Latin Masses when he was Bishop of Leeds.  However, the appointment may not be as significant as one might think, as matters concerning tradition and the Latin Mass are dealt with by the Congregation for the Doctrine of the Faith.

What ever the consequences, we offer Archbishop Roche our congratulations.

Posted by Et Expecto at 2:24 pm No comments:

I understand that the COVID restrictions governing church services have been eased.  This means that congregations amounting to 50% of the normal capacity of the church are permitted.  The consequence is that there should now be plenty of space in churches for everyone who wants to attend Latin Masses.

At St Wilfrid's in York, alternate benches are now available for use.

Posted by Et Expecto at 9:05 pm No comments:

Church of St Charles in Hull

I attended the Latin Mass held on the Feast of the Ascension at St Charles' Church in Hull.  According to my count, the congregation numbered 41, which I thought was good. 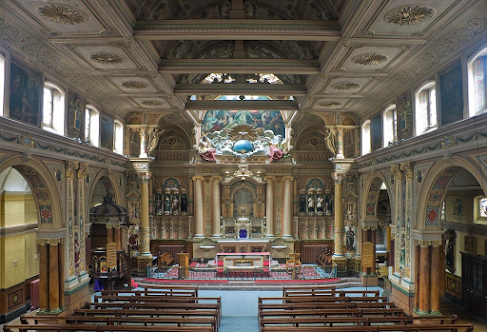 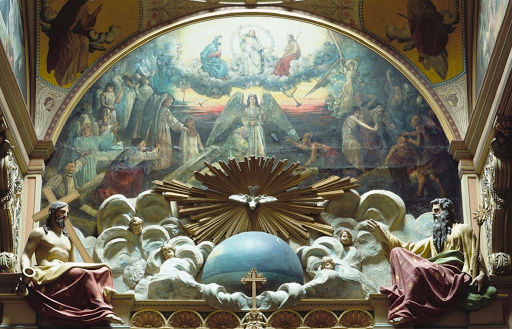 A great deal of money has been spent on the church recently to repair the roof, which had been leaking for years, and causing further damage. The exterior of the church is now looking well, but it is evident that there is plenty more work to be done on the inside.  Much of the plaster in the side aisles is decayed and falling away.

The parish priest, Fr Benfield, said to me that he thought that it was the perfect setting for the Latin Mass.

It is a fine church, with very elaborate decorations in the centre of Hull.  Let us hope that the money can be found to fully restore it, and that there will be many more Latin Masses there.

Feast of the Ascension

Thursday 13th May is the Feast of the Ascension.  There will be a Latin Mass at the Church of St Charles Borromeo in Hull at 7.30 pm.  It will be offered by Fr William Massie.

There will also be a Sung Mass at 6pm at the York Oratory.
Posted by Et Expecto at 11:06 am No comments:

After a break of a year due to COVID, the Latin Mass Society will be resuming its annual walking pilgrimage to Walsingham over the August bank holiday weekend.  Solemn Mass is offered each day, and the Rosary is recited (or sung) as the pilgrims walk the route.  The final Mass will take place at the Walsingham Shrine at on Sunday 29th. 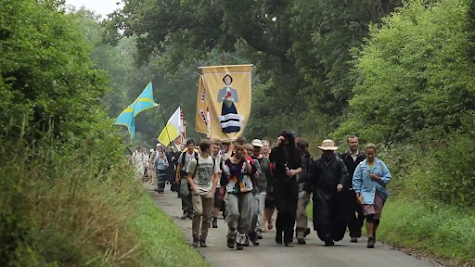 Pilgrims planning to walk the 57 miles from Ely to Walsingham should assemble in Ely on the evening of Thursday 26th August.  Ladies are provided with overnight accommodation in halls at points along the route, whilst men are expected to camp.

Anyone wishing to take part in the walking pilgrimage must register before the event.  This can be done on the main website of the Latin Mass Society.

For those who do not feel able to make the long walk, an alternative is to make a day pilgrimage by gathering at the Walsingham Shrine for Mass at 2pm on the Sunday.  This will be followed by a procession along the Holy Mile and conclude around 5pm with Devotions at the site of the Holy House.  No registration is required for day pilgrims.

Posted by Et Expecto at 9:55 am No comments: