There will be a Sung Latin Mass for the Feast of Corpus Christi at St Wilfrid's Church in York on Thursday 31st May at 6pm.  The Choral Scholars will be singing Josquin's setting of the Mass, Pange Lingua.
Posted by Et Expecto at 4:51 pm No comments:

The Latin Mass in Uganda


According to the Ugandan newspaper, the Daily Monitor, a Latin Mass is offered every Sunday at the Catholic Management and Training Institute in Rubaga in Uganda.  This Institute is associated with the local cathedral.  The Mass is celebrated by Fr Christophe Nouveau, who, it seems, is the only priest in Uganda able to offer mass in the traditional form, although two more have now been sent to France for training.

Parishioners of Rubaga had contacted Fr Nouveau in 2004 when he was stationed in Kenya, but had to wait until 2015, when Fr Nouveau moved to Kenya, for a regular Latin Mass.  Fr Nouveau also travels to Rwanda, Tanzania and Burundi to celebrate occasional Latin Masses.

The pilgrimage in honour of the Martyrs of England & Wales held in Preston last Saturday went very well.  It was a beautiful day with a completely blue sky, which enabled some excellent photographs to be taken.

Starting at St Walburge's Church, the procession moved through pleasant tree lined streets to the English Martyrs Church, a distance of about a mile. The Rosary was recited, as was a litany of the English Martyrs, and hymns were sung.  A couple of main roads were crossed, but this caused little disruption and vehicles courteously gave way to the estimated 150 people taking part.

About another 50 people were waiting at the English Martyrs Church for the Solemn Mass.  The Sisters sang the propers of the Mass beautifully, as did the choir who sang Byrd's Mass for Three Voices.

Afterwards refreshments were served in the adjacent hall.

Here are some pictures; 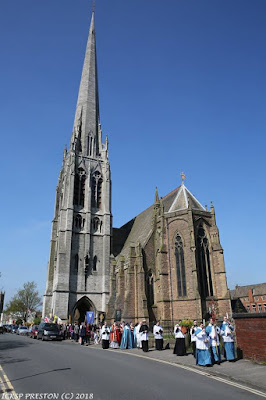 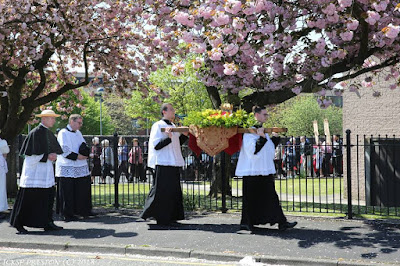 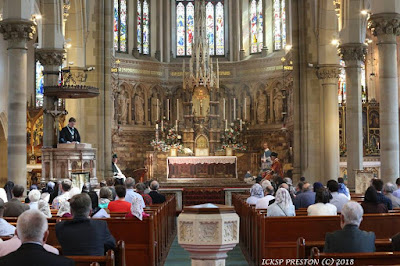 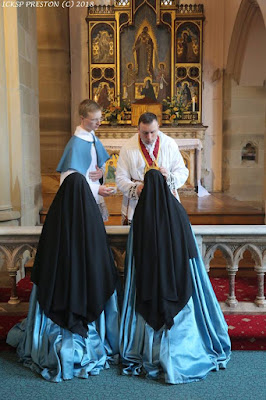 
Last November, the Institute of Christ the King Sovereign Priest opened a House of Discernment for young men exploring their priestly vocations.  Four potential priests took up residence in the presbytery attached to St Walburge's Church in Preston.  As it has turned out, one dropped out of the scheme part way through, but two are now submitting their applications to join the Institute's seminary at Gricigliano.  A further one has decided to pursue a vocation as an Oblate in the Institute.

This is very good news.  The Institute is now advertising for candidates for next year's intake, who will enter the House of Discernment in November.  Let us hope that there will be plenty of applicants.
Posted by Et Expecto at 4:37 pm No comments:

No Latin Mass at Hedon on Sunday 13th May

Due to the absence of Fr Drew, there will be no Latin Mass at Hedon on Sunday 13th May.

I may have caused some confusion in an earlier post by saying that there will be no Mass on 6th May.  This was an error.  The Latin Masses at Hedon are on the second Sundays of the month at 5pm.
Posted by Et Expecto at 4:33 pm No comments:

Feast of the English Martyrs


5th May is the Feast of the Martyrs of England and Wales.  It will be celebrated in Preston on Saturday 5th May with a pilgrimage jointly organised by the Latin Mass Society and the Institute of Christ the King Sovereign Priest.

Pilgrims should assemble at St Walburge's Church at 11.45 for the procession that will depart at noon.  It is about a mile to the Church of the English Martyrs where a Solemn Mass will be offered.
The weather forecast is good, so the organisers are hoping for a good turnout.  Bring banners if you can.
Posted by Et Expecto at 10:27 am No comments:

The Usus Antiquior and the Seminarians of Paris.

Fr Michael Brown has picked up an interesting story from a French website.  Apparently it is the custom at the seminary serving the Archdiocese of Paris, that each year the students are given the opportunity to study an extra subject that is normally outside the curriculum.  The subject is selected by some form of ballot.

It is reported that this year the eighty students voted by an absolute majority to study traditional litergy and the motu proprio Summorum Pontificum.  It is reported that, despite the disquiet of several bishops,  this tuition is now being provided.  For those whose French is better than mine, the whole story can be read on the website
renaissancecatholique.org/les-seminaristes-de-paris-a-la-decouverte-de-la-messe-traditionnelle/
Posted by Et Expecto at 5:40 pm No comments: