Petition Concerning the Closure of Ushaw 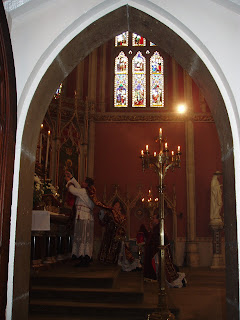 A petition has been set up protesting at the manner in which the trustees of Ushaw College have announced its closure. It urges the trustees to defer the closure until such time as proper consultation has taken place and schemes for its survival have been considered.

There is a fair bit of background information about the closure of Ushaw College on Fr Brown's blog, Forest Murmers and Fr Elkin's blog, Let the Welkin Ring.
Posted by Et Expecto at 4:28 pm No comments:

I have just received notification that Ushaw College is to close next June at the end of the academic year. More surprisingly, the notification states that there will be no conferences after 31st December 2010.

The reason for my being notified is that the Latin Mass Society has a booking for a Priests' Training Conference next August, and this cannot now take place. By good fortune, the Latin Mass Society also has a booking for a Priests' Trining Conference at Buckfast Abbey to take place during next May, so at least there will still be some provision for priests' training in 2011.
Posted by Et Expecto at 4:17 pm 1 comment:

Feast of the Immaculate Conception in Middlesbrough

On the feast of the Immaculate Conception, I travelled to Middlesbrough to attend the sung Mass celebrated by Fr William Charlton. Fr Simon Henry of the Liverpool Diocese was also present and acted as MC. I took the part of thurifer and Eamonn sang the propers in plainchant.

A choir consisting of just four singers sang Schubert's Mass in C Major very creditably, and Elgar settings of Ave Maria and Ave Maris Stella. Afterwards there were refreshments in the Hall, with an impressive cake to mark the golden jubilee of the parish of St Alphonsus.
Posted by Et Expecto at 7:12 pm No comments:

What a lot of good news there has bee over the weekend.

We read that the usus antiquior is to return to Croatia. Following intervention by the Pontifical Commission Ecclesia Dei, it has been announced that Masses will be offered in the usus antiquior at one of the churches in Zagreb. This is a major breakthrough for the predominently Catholic country of Croatia, whose bishops have resisted summorum pontificum up to now.

There will be a weekly Sunday Mass in the cathedral of the Diocese of Marquette. Fr John Boyle of the Southwark Diocese, and on temporary secondment to Marquette, will be one of the regular celebrants. Another will be Bishop Sample, the local ordinary, who hopes to say this Mass about once a month.

Also from the USA, we read that Archbishop Schnurr of Cincinnati has decided that the Church of St Mark in that city will be reopended to serve as a parish dedicated to the traditional liturgy. This is an exceptionally fine church in the Italian renaisance style that closed because the congregation had largely moved away. Apparently, it is in need of expensive restoration, but will provide an ideal setting for the traditional Mass.

The second Ordinariate for former Anglicans to be set up, will be in Australia. It seems that this will follow closely on the heels of the English one expected to be set up in the new year. It is expected that the United States and Canada will follow soon after.
Posted by Et Expecto at 7:31 pm No comments:

www.catholicworldreport.com
It contains a brilliant article by Dominic Scarborough entitled, Outside the Magic Circle, which is highly recommended reading.
Posted by Et Expecto at 6:30 pm No comments: