There will be a Low Mass at the Church of St Charles in Hull on Wednesday 1st June at 6.30pm.  Fr Pewter Mulholland will be the celebrant.
Posted by Et Expecto at 1:16 pm 1 comment:

On 21st May I reported on Bishop Libasci of Manchester, New Hampshire handing over care of the Church of St Stanislaus to the FSSP.  I am sure that they will be delighted with the church building that they will be acquiring. 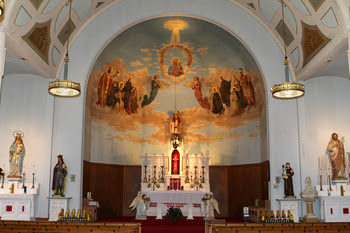 Apparently, it became surplus to requirements for the celebration of Mass when parishes were merged a few years ago, but has been used for eucharistic adoration since then.

On 27th May, I reported on a similar move by Bishop Barres of the Diocese of Allentown, who handed over the Church of St Stephen of Hungary to the FSSP.  This seems to be a continuing trend, as there are now about 50 examples in the USA of former diocesan churches being in the care of traditional orders.  I suppose one could add the churches run by the Society of St John Cantius, and possibly others, to the list.

The example has been followed to a degree in England and Wales at New Brighton, Preston and Warrington, and one could add York and Bournemouth.  There must be many other opportunities to hand over underused churches in our larger cities.  Manchester, Liverpool and Birmingham are obvious examples, and opportunities probably exist in other cities like Bristol, Nottingham, Leeds, Derby and Newcastle.  There may even be some suitable underused churches in our own Diocese of Middlesbrough.

With iuncreasing numbers in the seminaries of both The Priestly Fraternity of St Peter and the Institute of Christ the King, Supreme Priest, including candidates from these British Isles, these orders will have the priests to staff to to take on more missions.  Let us hope that the bishops of England and Wales will follow their American cousins, and make more churches available.
Posted by Et Expecto at 1:59 pm No comments:

Further Expansion of the FSSP in USA

Rorate Coeli has posted a report of another American bishop handing over responsibility for a parish parish to the Priestly Fraternity of St Peter.  In this case it is Bishop John Barres of the Diocese of Allentown in Pennsylvania, and the parish is St Stephen of Hungary.

I have often said that what is done in America today will happen this side of the Atlantic tomorrow. So maybe we can look forward to more churches being handed over to traditional orders in the future.  A start has been made in New Brighton, Preston and Warrington, but there is a long way to go to catch up with the States, where about 50 churches are now in the hands of traditional orders.

Bishop Barres should be congratulated for making this decision.
Posted by Et Expecto at 6:16 pm 1 comment:

Next Wednesday, being the first Wednesday of the month, there will be a Low Mass at 6.30pm at the Church of St Charles in Jarratt Street in Hull.  The celebrant will be Fr Peter Mulholland.
Posted by Et Expecto at 1:14 pm No comments:

Good News from the Diocese of Leeds

It has recently been announced that the Church of St Joseph in Pakington Street, Bradford, is to become the principal church in the Diocese of Leeds for the celebration of Mass in the Extraordinary Form.  Making the announcement, Bishop Marcus Stock said that he had made the decision in response to numerous requests for a regular Extraordinary Form Sunday Mass at an easily accessible location in the Diocese.

It is expected that the new arrangements will start in September, and that there will be a sung Latin Mass every Sunday at 12.30pm.  It is probable that a roster of priests will be drawn up to celebrate this Mass, and it is not clear yet what impact the new arrangements will have on Latin Masses currently being celebrated in the diocese.  Neither is it clear whether the church will be used for other traditional devotions besides the Sunday Mass.
Posted by Et Expecto at 1:04 pm No comments:

Rorate Caeli reports that the Bishop of Manchester in New Hampshire, Rt Rev Peter A Libasci, has handed over the church of St Stanislaus in Nashua to the Priestly Fraternity of St Peter to become a personal parish for those who adhere to the traditional form of the Mass.  Originally built to serve the Polish community, the church was incorporated into another parish several years ago, since when it has been little used, with the prospect of closure and demolition never far away.

'Since coming here in 2011, I have heard from many Catholics who have a deep affection for the traditional liturgical forms of the pre-Vatican II era,' said Bishop Libasci. 'Consistent with that desire I am happy to announce the opening of this parish, dedicated to the Extraordinary Form of the Mass, as suggested by Pope Benedict XVI in his Apostolic Letter Summorum Pontificum, issued Motu Proprio in 2007.'

It should be noted that Bishop Libasci has actually created a personal parish, in contrast to the developments in England, where churches have been handed over to traditional orders in New Brighton, Preston and Warrington to become shrine churches.  In fact, the FSSP have charge of more than 30 parishes in the USA.

Congratulations are due to Bishop Libasci and all the other bishops of the USA who have been so welcoming to the to the traditional orders.
Posted by Et Expecto at 9:59 am No comments:

Thursday 26th May is the feast of Corpus Christi.  There will be a sung Mass at 6pm in the church of St Wilfrid in York.

There will also be a Mass at 7pm at the Church of the Holy Sacrament at Marton.
Posted by Et Expecto at 1:37 pm No comments:

The annual pilgrimage pilgrimage to Holywell organised by the Latin Mass Society will take place this year on Sunday 3rd July.  Solemn Mass will be celebrated by Canon Scott Tanner ICKSP at 2.30pm in the Church of St Winefride in Holywell, and that will be followed be a procession down the hill to the holy well, where there will be veneration of the relic.  The day concludes with Benediction.

This is a very long established pilgrimage in the Latin Mass Society, and has in the past attracted large crowds.

According to the Daily Telegraph, the General Synod of the Church of Scotland will be holding a meeting next week, at which a proposal that baptisms might in future be conducted on line.  That is without any need for the candidate to attend a church.  Is it any surprise that the Church of Scotland is declining rapidly?
Posted by Et Expecto at 2:47 pm No comments:

And Now Bournmouth to get Oratory

Hard on the heels of the Cardiff Oratory announcement is news that there is also to be an Oratory at Bournmouth.  Bishop Egan will be making the very fine church of the Sacred Heart in the centre of Bournmouth available for yet another Oratory project.

This brings to four the number of new Oratories that have that have been announced in the last few years.  These Oratories in formation  are at Manchester, York, Cardiff and Bournmouth.  There are also fully formed Oratories in Birmingham, London and Oxford.

It seems that Oratories are in the vanguard when it comes to the re-evangelisation of England and Wales.
Posted by Et Expecto at 7:10 pm No comments:

Cardiff to get Oratory

Fr Michael Brown of Gateshead Revisited, has posted information about the formation of yet another Oratory in Cardiff.  It seems as if it is to based around the University Chaplaincy.

This story has taken a little while to come to the surface,  According to Fr Brown, Archbishop Stack gave permission for the formation of an Oratory in the Archdiocese back on 11th February, and a formal decree was granted by the Confederation of Oratories on 22nd March.  On 29th April the two founding members of the community were clothed, and it seems that it was at this point that the venture was made public.

The community consists of Fr Sebastian Jones and Br Ambrose Jackson.   Fr Sebastian is better known to many of us as Fr Gareth Jones who has been a strong supporter of the Latin Mass.

As at York, the new venture will be an "Oratory in Formation" until such time as as the community grows in size and can demonstrate its stability.
Posted by Et Expecto at 1:42 pm No comments:

No Mass at Marton this week.

The next Mass at the church of the Most Holy Sacrament at Marton will be on the feast of Corpus Christi.

There will be the usual monthly Latin Mass at St Charles Church in Hull at 6.30pm this Wednesday, 4th May.

On Thursday, being the Feast of the Ascension, there will be Latin Masses at 6pm in St Wilfrid's Church in York and 7.30pm at the Church of the Most Holy Sacrament at Marton.
Posted by Et Expecto at 6:22 pm No comments: