Saint Margaret Clitherow does not have her own feast day in the calander used with the usus antiquior, but in the new calander she does, and it is 26th March. This year, that will be a Saturday, and there is to be a Missa Cantata in York Minster on that day in honour of this York martyr and patron of the Latin Mass Society.

The Mass, which is to be celebrated by Fr Stephen Maughan, will be at 1.30pm, probably at the High Altar. It will be followed by a procession which will pass through the Shambles, where there is a permanent shrine to the martyr; and then cross Ouse Bridge, where the saint was put to death. The procession will end at the Bar Convent, where there will be Benediction and veneration of the relic.

This pilgrimmage is expected to attract large numbers, so pilgrims are asked to be in York Minster in plenty of time. Parking can be difficult in York, so visitors are advised to consider using the Park and Ride service.

This pilgrimage has been organised by the Latin Mass Society and has been made possible by the kind permission of the Dean and Chapter of York Minster.
Posted by Et Expecto at 6:22 pm No comments:

Feast of the Purification

Wednesday 2nd February will be thw Feast of the Purification, otherwise known as Candlemas. It marks the end of the season of Christmastide and candles feature in the liturgy.

The feast will be celebrated at the church of the English Martyrs in York wit a Mass at 6.30pm.
Posted by Et Expecto at 6:14 pm No comments:

The French traditional organisation, Paix Liturgique, has published some interesting facts about the state of the Church in France, and the increasing influence of the traditional movement.

There are 160 seminarians studying for the priesthood, who are destined to celebrate in the usus antiquior. This is, apparently, 20% of the total, meaning that the total is 800. Paix Liturgique indicate that this percentage is rising and anticipate that it will reach 25%.

The number of places where Mass is celebrated in the usus antiquior has increased by 72, from 132 to 204. This is an increase of 55%, but the period over which this has been achieved is not specified. In addition, the SSPX have 184 Mass centres.

These look impressive figures. Perhaps the major breakthrough that has occurred in France, but is yet to happen in England, is in the Diocese of Frejus Toulon. The seminary of this diocese teaches both forms of the Roman Rite, and encourages students who favour the usus antiquior.
Posted by Et Expecto at 2:33 pm No comments:

Yet More News about Ushaw

Today, the trustees of Ushaw College are meeting and presumably the main item on the agenda is the closure of the college. One would hope that the trustees will be giving consideration to the proposal that has been put to them whereby an independent Catholic trust would take over the estate and run it as a conference centre and retreat centre, thereby preserving some of its historic and cultural associations.

Another thing that they might be considering is the on-line petition, now signed by over 1100 people, calling on the trustees to forestall the closure until all the options have been considered and there has been the opportunity for public debate.

www.ipetitions.com/petition/ushaw/
Posted by Et Expecto at 12:36 pm No comments: 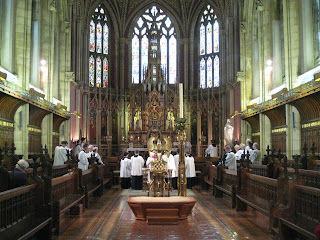 Today's edition of the Newcastle Journal carries an interesting article about Ushaw College. It is headed:

The petition, which can be found at:

calls on the trustees of Ushaw College (who are the bishops of the dioceses of the northern province plus the bishop of Shrewsbury and are under the chairmanship of Archbishop Kelly) not to close Ushaw until there is proper consultation, and there has been a full examination of alternative alternative uses. The petition has attracted over 700 signitures.

Whilst this report is cause for much encouragement, the task of putting forward an a viable business plan, and convincing the trustees to accept it, still remains. Many suggestions have been made for the future of Ushaw College and more would be welcome. It does seem to be the case that there is a widespread body of opinion emerging that is determined to see Ushaw saved.
Posted by Et Expecto at 6:59 pm 1 comment: