A Mass for Young People


New Liturgical Movement has a report on a Mass in the Extraordinary Form celebrated a as part of the the National Catholic Youth Conference of the USA.  It took place on the Feast of St Cecilia and was very well attended as the picture below illustrates. 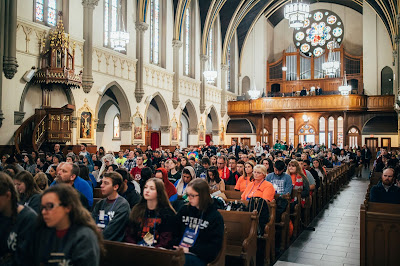 I understand that the venue for the Extraordinary Form Mass was moved to one of the largest churches in Indianapolis because a large congregation was anticipated.   However, the number of young people who actually attended exceeded all expectations.  The article does not record how many attended the Novus Ordo Mass.

The picture clearly demonstrates that a large number of the young people opted for the Latin Mass.  There can be little doubt that this form of the Mass is proving to be increasingly popular with young people, especially in America.  There is also evidence that the same trend is occurring here in England.

The article includes a video of the Mass.
Posted by Et Expecto at 4:00 pm No comments:


This is a reminder of the event at St Wifrid's Church in York on Thursday 28th November at 6pm.

Posted by Et Expecto at 3:59 pm No comments:


The Priestly Society of St Peter has published statistics for its membership.  As of  1st November 2019, the figures are as follows:

There are 10 deceased members.

Each year there is an average of 13 priestly ordinations.  The growth in the membership of the order since its foundation in 1988 is shown in ye following graph.

The green line represents seminarians,the red priests and the blue line is the total.
Posted by Et Expecto at 3:52 pm No comments:

The Institute of Christ the King in Belfast


The first Mass at the Institute's newly acquired church in Belfast will take pl;ace at 6pm on Wednesday 11th December.  It will be a Solemn Mass celebrated by Mgr Wach, Prior General if the Institute, and in the presence of  His Lordship Noel Treanor, Bishop of Down and Connor. 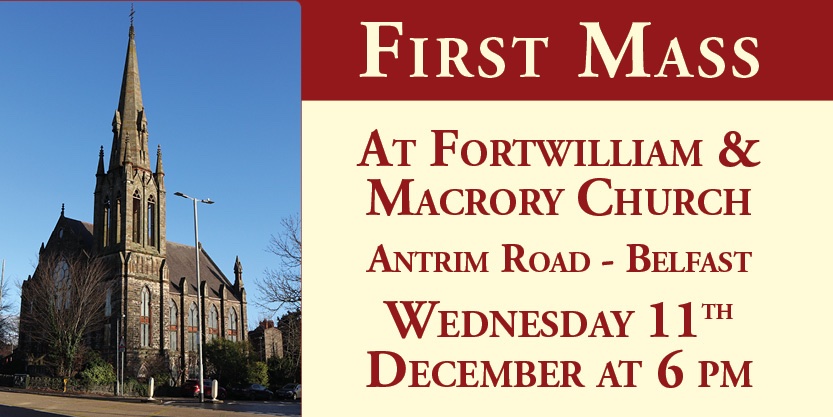 The former Presbyterian church has has been hastily worked on to make it suitable for Catholic use, so may be in need of further adaptations.  Nevertheless, I am sure that it will be a great occasion.
Posted by Et Expecto at 7:48 pm No comments:


Don't forget that there will be a Latin Low Mass at the Catholic Chaplaincy in Hull on Thursday 21st November at 7.30pm.
Posted by Et Expecto at 7:29 pm No comments:

About the Institute of Christ the King, Sovereign Priest


I found the following on the Irish site of the ICKSP.  It gives a summary of who they are, how many they are, and what they do.


Founded in 1990, the Institute of Christ the King Sovereign Priest is a Roman Catholic Society of Apostolic Life of Pontifical Right in communion with the Holy See. The 115 priests of the Institute work across the globe to promote the spiritual Kingship of Christ. A special emphasis is laid on the harmony between faith and culture, and the young community has acquired a reputation for promoting the arts, especially sacred music and architecture.
The motherhouse and international seminary of the Institute of Christ the King is based in Florence, Italy, where 90 seminarians are training for the priesthood. It also has over 50 religious sisters, especially devoted to the Sacred Heart of Jesus, who live a semi-cloistered life and 17 oblates (lay brothers). Among these are several Irish vocations. The average age of this community’s members is 24 for seminarians, 28 for sisters, 41 for oblates and 39 for priests. The community has missions in Gabon (Africa) and important apostolates in the United States, England, France, Spain, Belgium, Switzerland, Austria, Germany and Sweden and naturally in Rome, where their founder, Monsignor Gilles Wach, was ordained to the priesthood by Saint Pope John Paul II.

Here is a picture of many of their priests gathered at their motherhouse in Gricigliano, near Florence.

Here are some of the sisters.  Those with white veils are novices.
To slow how the female branch of the order is continuing to grow, her is a picture of a recent batch of postulants.  It seems that each year brings increasingly large numbers of new members. 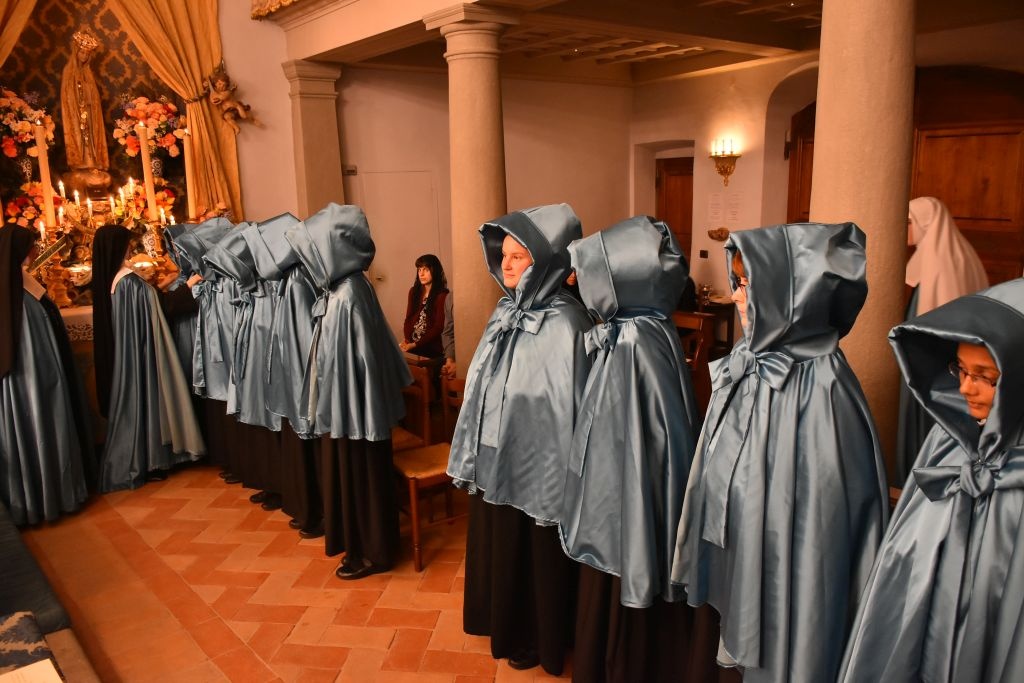 Posted by Et Expecto at 7:25 pm No comments:

To mark the canonisation of John Henry Newman, there is to be a special service of readings, hymns and choral music at St Wilfrid's Church in York on Thursday 28th November.  Here is the poster.

Posted by Et Expecto at 5:59 pm No comments:

Adorers of the Royal Heart of Jesus


The Adorers of the Royal Heart of Jesus Sovereign Priest, who form the female branch of the Institute of Christ the King Sovereign Priest are continuing to grow at a remarkable rate.  Last year, they welcomed eight new postulants to the order, and will shortly be accepting a further ten.  It is normal for the postulants to spend a year living with the community before being clothed in the habit of the order.  They then join the novitiate, for a minimum of three years before before becoming fully professed nuns.

The order was founded in 2001, with the first three members taking the habit in 2004.  Now there are about 50 sisters with a steady flow of postulants to ensure the growth of the order.

The novitiate is now located in Naples, and there are convents in Switzerland, Germany England and the USA.  Here are six novices and one professed nun in front of the spectacular High Altar of the Institure's church in Florence.

Here is their convent in Engelport, Germany.

One of the sisters teaching at St Benedict's Academy in Preston.

With the community expanding at the present rate, we can expect many more foundations in the coming years.  However, there are costs involved.  Just to take on another member of the community costs nearly £1,000, in providing a habit and living essentials.
Posted by Et Expecto at 6:38 pm No comments:


After a break of a week, the Extraordinary Form Mass in Hull will resume on Thursday 14th November.  As usual it will be a Low Mass celebrated at 7.30pm by Fr Massie in the Catholic Chaplaincy of Hull University.

The Mass is open to all, and not specifically for students.  Fr Massie pointed out to me that the Mass will be offered every Thursday regardless of whether it is term time or not.

Up to now the attendance has been good, with nearly every seat taken in the fairly small chapel.  I have noticed that the congregation includes many new faces that I do not remember seeing at the Latin Masses either at St Charles' Church or in Hedon.  This would suggest to me that interest in the Latin Mass is more widespread most people imagine.
Posted by Et Expecto at 3:52 pm No comments:


It has been announced that the Oratory in Formation in Manchester, located at the Church of St Chad in Cheetham Hill Road, is now a fully erected independent Oratory.  The community consists of Fr Raymond Matus, Fr Christopher Hilton, Fr Richard Bailey, Br Gerard Connett and Br Fabian Trevithick.


The church which dates from 1847 was designed by Matthew Ellison Hadfield and is a Grade II* Listed Building.  The roof is supported by hammer beams which seem unnecessary for the modest width of the nave. 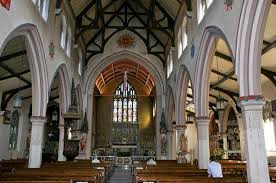 Mass is offered in the Extraordinary Form every Sunday at 4.45pm.  We wish the Manchester Oratory every success.
Posted by Et Expecto at 3:49 pm No comments:

The Taking of the Pachamama Explained


This video explains exactly how the Pachamama statues were taken from a Rome church and tossed into the Tiber.  Follow the link at the bottom and then press play.


The following is an extract from The Missive, the website of the Priestly Fraternity of St Peter in the USA.

Newer apostolates have seen dramatic growth, some doubling their numbers over the last year, such as Los Angeles, which went from 250 per Sunday to 500. The apostolate did not even have its own church until 2018, so finally settling down in a small church in San Fernando provided needed stability, contributing to the significant increase it saw this past year.
“The main obstacle right now is a lack of space,” said Fr. Federico Masutti, assistant pastor of St. Vitus, talking to the Missive over the summer. His words echo the sentiment of so many other FSSP apostolates that find themselves outgrowing their buildings, but it’s really a great problem to have.
“When we were at 200 people,” said pastor Fr. James Fryar, “we decided to add the fourth Mass, and just adding that one Mass, from one week to the next, another 200 people came.”
“The growth was amazing,” confirmed Fr. Masutti.

It is only a short portion of a long article, so I advise going here   https://fssp.com/annual-census-shows-prolific-growth-at-fssp-parishes/     to read the full article.   This picture shows how full one of their churches can be. The FSSP has 33 Personal Parishes in the USA.  These are non-territorial parishes with a dedicated church.  They have many other apostolates that do not carry the status of a parish.

It seems that growth in Mass attendance at FSSP churches has accelerated in the last few years.
Posted by Et Expecto at 1:22 pm No comments:

For some time now, Fr Stephen Maughan has been saying a Low Mass in the Extraordinary Form at the Church of the Sacred Heart in Park Street South, Middlesbrough.  It is at 9am on Saturdays.

The church, which was opened in 1934, is built in a Romanesque style, and has retained its altar rails.  Some years ago, before Fr Maughan moved to Middlesbrough, he, used to celebrate the Sunday Latin Mass at the English Martyrs Church in York.
Posted by Et Expecto at 12:21 pm No comments:

No Mass at Hull on Thursday


The regular Thursday evening Low Mass at the University Chaplaincy in Hull will not take place on Thurs 7th November due to Fr Massie not being available.
Posted by Et Expecto at 11:57 am No comments: