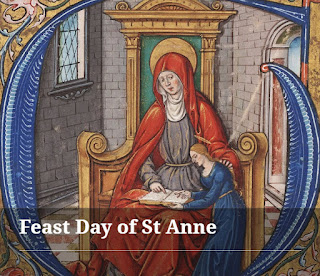 There will be a Mass according to the Usus Antiquior at 6.30 pm. on Friday the 26th at St Mary's Church, Bishophill Junior, York. Confessions at 6.00 pm and after Mass, the usual refreshments and possibly a trip to the chip shop.
Posted by Mike Forbester at 9:11 am No comments:


Worldwide, a total of 24 priests are being ordained this summer to Orders of priests that exclusively celebrate Mass in the Extraordinary Form.  The breakdown is as follows:
Priestly Fraternity of Saint Peter:   16
Institute of Christ the King Sovereign Priest:   7
Institute of the Good Shepherd:  1

In addition, the SSPX are ordaining 13, and there may be others.  Going by the numbers of students in their seminaries, it is likely that the number of ordinations in traditional Orders of priests will increase in the years to come.


This year's pilgrimage in honour of St Margaret Clitherow will take place in York on Saturday 31st August.  The programme will be as follows:

The procession will pause at at Micklegate Bar, Ouse Bridge, and the Shambles for recitation of the Rosary and readings about the life of St Margaret Clitherow.

Posted by Et Expecto at 9:21 am No comments:


Art 1.  The Roman Missal promulgated by Pope Paul VI is the ordinary expression of the lex orandi (rule of prayer) of the Catholic Church of the Latin rite.  The Roman Missal promulgated by Saint Pius V and revised by Blessed John XXIII is nonetheless to be considered an extraordinary expression of the same lex orandi of the Church and duly honoured for its venerable and ancient usage.  These two expressions of the Church’s lex orandi will in no way lead to a division in the Church’s lex credendi (rule of faith); for they are two usages of the one Roman rite.
It is therefore permitted to celebrate the Sacrifice of the Mass following the typical edition of the Roman Missal, which was promulgated by Blessed John XXIII in 1962 and never abrogated, as an extraordinary form of the Church’s Liturgy.  The conditions for the use of this Missal laid down by the previous documents Quattuor Abhinc Annos and Ecclesia Dei are now replaced as follows:
Art. 2.  In Masses celebrated without a congregation, any Catholic priest of the Latin rite, whether secular or regular, may use either the Roman Missal published in 1962 by Blessed Pope John XXIII or the Roman Missal promulgated in 1970 by Pope Paul VI, and may do so on any day, with the exception of the Easter Triduum.  For such a celebration with either Missal, the priest needs no permission from the Apostolic See or from his own Ordinary.

Art. 3.  If communities of Institutes of Consecrated Life and Societies of Apostolic Life, whether of pontifical or diocesan right, wish to celebrate the conventual or community Mass in their own oratories according to the 1962 edition of the Roman Missal, they are permitted to do so.  If an individual community or an entire Institute or Society wishes to have such celebrations frequently, habitually or permanently, the matter is to be decided by the Major Superiors according to the norm of law and their particular laws and statutes.
Art. 4.  The celebrations of Holy Mass mentioned above in Art. 2 may be attended also by members of the lay faithful who spontaneously request to do so, with respect for the requirements of law.
Art. 5, §1  In parishes where a group of the faithful attached to the previous liturgical tradition stably exists, the parish priest should willingly accede to their requests to celebrate Holy Mass according to the rite of the 1962 Roman Missal.  He should ensure that the good of these members of the faithful is harmonized with the ordinary pastoral care of the parish, under the governance of the bishop in accordance with Canon 392, avoiding discord and favouring the unity of the whole Church.
§2  Celebration according to the Missal of Blessed John XXIII can take place on weekdays; on Sundays and feast days, however, such a celebration may also take place.
§3  For those faithful or priests who request it, the pastor should allow celebrations in this extraordinary form also in special circumstances such as marriages, funerals or occasional celebrations, e.g. pilgrimages.
§4  Priests using the Missal of Blessed John XXIII must be qualified (idonei) and not prevented by law.
§5  In churches other than parish or conventual churches, it is for the rector of the church to grant the above permission.
Art. 6.  In Masses with a congregation celebrated according to the Missal of Blessed John XXIII, the readings may be proclaimed also in the vernacular, using editions approved by the Apostolic See.
Art. 7.  If a group of the lay faithful, as mentioned in Art. 5, §1, has not been granted its requests by the parish priest, it should inform the diocesan bishop.  The bishop is earnestly requested to satisfy their desire.  If he does not wish to provide for such celebration, the matter should be referred to the Pontifical Commission Ecclesia Dei.
Art. 8.  A bishop who wishes to provide for such requests of the lay faithful, but is prevented by various reasons from doing so, can refer the matter to the Pontifical Commission Ecclesia Dei, which will offer him counsel and assistance.
Art. 9, §1  The parish priest, after careful consideration, can also grant permission to use the older ritual in the administration of the sacraments of Baptism, Marriage, Penance and Anointing of the Sick, if advantageous for the good of souls.
§2  Ordinaries are granted the faculty of celebrating the sacrament of Confirmation using the old Roman Pontifical, if advantageous for the good of souls.
§3  Ordained clerics may also use the Roman Breviary promulgated in 1962 by Blessed John XXIII.
Art. 10.  The local Ordinary, should he judge it opportune, may erect a personal parish in accordance with the norm of Canon 518 for celebrations according to the older form of the Roman rite, or appoint a rector or chaplain, with respect for the requirements of law.
Art. 11.  The Pontifical Commission Ecclesia Dei, established in 1988 by Pope John Paul II [5], continues to exercise its function.  The Commission is to have the form, duties and regulations that the Roman Pontiff will choose to assign to it.
Art. 12.  The same Commission, in addition to the faculties which it presently enjoys, will exercise the authority of the Holy See in ensuring the observance and application of these norms.

We order that all that we have decreed in this Apostolic Letter given Motu Proprio take effect and be observed from the fourteenth day of September, the Feast of the Exaltation of the Holy Cross, in the present year, all things to the contrary notwithstanding.
Given in Rome, at Saint Peter’s, on the seventh day of July in the year of the Lord 2007, the third of our Pontificate.


Seven men were ordained to the priesthood today for the Institute of Christ the King.  The ceremony led by  Cardinal Raymond Burke took place in Florence.  One of the ordinands, Canon Ryan Post, has been resident at St Walburge's Church in Preston for several months.

Earlier in the week, Archbishop Guido Pozzo ordained 10 deacons and 8 subdeacons.  This should ensure that the Institute will continue to grow in the years to come.

Although there are no Englishmen among this batch of ordinations, there is good reason to suppose that there will be in the future.  In the lower years of the Institute's seminary in Gricigliano, there are  one Scottish and several English students.
Posted by Et Expecto at 6:20 pm No comments: