It will soon be September, which reminds me that there will be a Latin Mass in Hull on Wednesday 7th September.  It will be at 6.30pm in the Church of St Charles.
Posted by Et Expecto at 4:39 pm No comments:

I was not able to attend the Solemn Mass for the Feast of the Assumption in York last night, although I am sure that it was an excellent occasion, with a visiting choir from St Austin's in Wakefield singing.

The reason why I was not there was that I attended the Missa Cantata in Marton celebrated by Fr Mark Drew, with Fr Leworthy singing the propers.  I was very impressed to see the size of the congregation (about 40), especially in view of the remoteness of the location.  It proves that there are plenty of people about who are interested inthe Latin Mass.
Posted by Et Expecto at 1:08 pm No comments:

Signs of Growth in the Church

The website of the Catholic Herald includes an interesting article by Stephen Bullivant in which he asks the question: Could England's Catholic Church be entering a time of renewal?  Most of the piece concerns the opening of the Syro-Malabar cathedral in Preston and the activities of the Syro-Malsbar Catholic community which he estimates at 40,000.

Stephen Bullivant also refers to a number of other  encouraging initiatives.  These include the School of the Annunciation at Buckfast Abbey, the Sons of the Most Holy Redeemer in the Orkneys, the Sisters of the Gospel of Life in Glasgow, the Canons of St Ambrose and St Charles in Carlisle and the new Oratories in York, Manchester and Bournmouth.  The Shrine Churches at New Brighton and Preston belonging to the Institute of Christ the King, and at Warrington belonging to the Priestly Fraternity of St Peter are also mentioned.

It is noticeable that almost all the examples Stephen Bullivant gives relate to the more traditional movements in the Catholic Church.  Indeed, most have a strong attachment to the Latin Mass.  If Stephen Bullivant's examples are anything to go by, the future Church could not only be a flourishing Church, but one where the Latin Mass also flourishes.
Posted by Et Expecto at 5:30 pm No comments:

Feast of the Assumption - 15th August

On Monday 15th August, the Feast of the Assumption, there will be two traditional Latin Masses in the diocese.

The Mass in Hull last night in Hull was attended by a congregation of about a dozen.  Whilst this is more than the previous month, it is not as good as the 30 or so that we were getting several months ago.

I am arguing the case for a regular Sunday Mass in Hull, and, if this is to happen, we have to demonstrate that enough people in the area interested in the Latin Mass to justify a priest devoting his precious time to it.  So please continue to come along to St Charles Church at 6.30pm on the first Wednesday of each month.
Posted by Et Expecto at 5:01 pm No comments:

The Latin Mass Society's annual pilgrimage to Walsingham ts coming up very soon. Here is a picture from a few years ago. 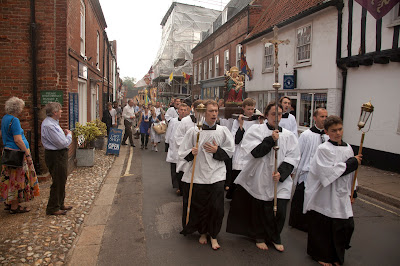 You don't actually have to walk bare foot, although, as you can see, quite a few people do.

The closing date for those who want to walk the 55 miles from Ely to Walsingham is fast approaching.  It is Mon 15th August.  Don't leave it too late!

For those not intending to walk, it is quite possible to attend as a day visitor.  The Mass at Walsingham is at 2pm on Sunday 28th August, and it is followed by a procession along the holy mile, ending in the Abbey grounds fir final devotions.

Day visitors can just turn up, but those undertaking the three day pilgrimage must book in on the LMS website.
Posted by Et Expecto at 4:48 pm No comments:

Tomorrow, being the first Wednesday of the month, there will be a Latin Mass at 6.30pm in the church of St Charles, Jarratt Street, Hull.  Fr Mulholland will be the celebrant.

Apologies for not publicising this earlier.
Posted by Et Expecto at 3:43 pm No comments:

Good News from the Institute of Christ the King

I read in the newsletter of the Dome of Home that  the Institute of Christ the King will have three British men joining their seminary in Gricigliano, near Florence, in September.  This is great news for the Institute who have two English priests, but currently no seminarians from this country.  I know two of the young men concerned and associate both of them with the shrine at New Brighton.

This news is particularly pleasing, because the Institute has taken a huge risk in opening two missions in England.  At both New Brighton and Preston, it was far from certain that the congregations would grow to justify taking over such large churches.  Furthermore, particularly at New Brighton, the Institute have taken over huge maintenance and repair commitments,

Our hope must be that these three are the beginning of of a steady flow of new priests.
Posted by Et Expecto at 2:19 pm 2 comments: