I have received the following message from Fr Charles Mwongera in Kenya:

About the WYD,we want to register this week and book Tickets for those who might be
going to Australia. We are asking all our friends to just send the little they have
fund-raised because we are already late. So don't mind the little that you have been
able to raise for us, we will appreciate. Just send to us so that we make the travel
arrangements.
God bless all your good intentions.Say hello to all the friends over there.
From Kenya,
Fr.Charles.

If you would like to help Fr Charles and the pilgrims from Kenya reach Sydney for World Youth Day please send a donation to the Latin Mass Society at:

Trip to London on 14th June

The Pontifical High Mass celebrated by Cardinal Castrillon Hoyos at Westminster Cathedral on Saturday 14th June will be a major occasion; and an opportunity to demonstrate the strength of the demand for the return of the traditional form of Mass to our parish churches. A hugh congregation is expected with many travelling from the north of England.

It is possible that a coach could be hired to take people from Yorkshire. Alternatively, arrangements could be made to share cars. Which ever way it is done, it is important that a sizable contingent heads south on the day.

There is to be another Mass in the usus antiquior at Scarborough. Fr William Charlton will again be saying a Low Mass on Wednesday 16th April at 7.30pm in St Peter's Church. Last time there was a very impressive congregation of about 150.

There is a picture of the sanctuary in the post dated 24th January. It is a very fine church and very suitable for the traditional rite. Please spread the word around.
Posted by Et Expecto at 4:25 pm No comments:

Press Release from the LMS

The Latin Mass Society is proud to announce that Cardinal Dario Castrillon Hoyos, President of the Ecclesia Dei Commission in Rome and Prefect Emeritus of the Congregation for the Clergy, has accepted its invitation to celebrate a Pontifical High Mass in the Traditional Latin Rite (the Extraordinary Form) in Westminster Cathedral on Saturday 14 June at 2.00 pm. 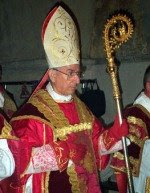 As befits a Prince of the Church, Cardinal Castrillon Hoyos will be welcomed at the Cathedral west door in full cappa magna before processing to the Blessed Sacrament Chapel to pray; he will then vest in the sanctuary whilst the Cathedral choir sings. Pontifical High Mass will then be celebrated at the High Altar with all the breathtaking ceremony and music integral to the Traditional Rite. Cardinal Castrillon Hoyos will also preach.
Julian Chadwick, Chairman of the LMS, said, “This is the highlight of the LMS’s 43 years of struggle on behalf of the Traditional Latin Rite. It will be the first time since the liturgical changes of 1969 that a Cardinal will have celebrated the Extraordinary Form in Westminster Cathedral [Note: Cardinal Alfons Stickler, Vatican Librarian Emeritus who died in December last year, presided at a High Mass in the Cathedral organised by the LMS in 1992 but did not celebrate]. Cardinal Castrillon Hoyos has been unstinting in his work on behalf of the Extraordinary Form and this Mass is a clear signal from Rome that it wants the Traditional Rite reinserted into the heart of the Church’s liturgical activity. We are extremely grateful to Cardinal Cormac Murphy-O’Connor for readily agreeing to this Mass and to Mgr Mark Langham, the Cathedral Administrator, and all his staff for their help with all the arrangements. This Mass literally represents the prayers of many thousands of LMS members and supporters offered up through the years and now come true.”
Posted by roydosan at 4:09 pm No comments: