I am slowly recovering from the trip to Cofton Park in Birmingham, and a day that I will never forget. In the very early hours of Sunday morning, 19th September, I joined a coach in Selby and with a group of pilgrims travelled to the outskirts of Birmingham, arriving around 03.30. Our coach was one of the first to arrive, which meant that, after a quick security check and a mile walk, we were able to take up positions in the very front row of the enclosure in Cofton Park. Only the VIPs had a better place.

Although it drizzled on and off during the six hour wait for the Mass of Beatification, the time seemed to pass very quickly. From around 7am, things began to happen, with the two massed choirs (one of schoolchildren and the other of adults) rehearsing various parts of the Mass. Soon after 8am there was a truly dreadful ecumenical service which was broadcast on BBC Radio 4. The less said about that the better.

From 9am helicopters were flying overhead, which many people mistakenly took as the arrival of the Holy Father. In fact, I think they were carrying camera crews for the television coverage. After several passes, and dashed expectations, it was a great surprise to see the screens showing a landed helicopter with His Holiness emerging over a red carpet. The crowd went wild with cheering and flag waving. It turned out that the landing site was some distance away, because the screens showed the Holy Father being driven by car through residential areas.

On arrival at the site there was the usual hand shaking with mayors and other dignitaries before the Pope climbed into the popemobile for a quick traverse of the site. Again the crowd went wild, especially when babies were presented for blessing and kissing.

The Beatification Mass was novus ordo with the preface and canon in Latin. The kyrie was a version of the orbis factor kyrie and Credo III was sung. The Gloria, Sanctus and Agnus Dei were in English and taken from James Macmillan's Mass, specially composed for the beatification. The choirs sang very well, considering that they had only come together a few hours before. I was a little disappointed with the selection of music. To my mind, Macmillan's Mass was not as wonderful as many had made out, and I suppose it was inevitable that some Taize chant would have been included. However Elgar's Ave Verum was much welcomed, as were other motets; and Praise to the Holiest was sung with great gusto.

I was very heartened to see how well the altar servers had been trained and how well they presented themselves. I could not say the same for all the numerous concelebrants, many of whom seemed not to have their attention fully focused on the actions on the sanctuary. Despite one or two criticisms, it must be said that the Mass was a wonderful experience, and credit for this largely rests with Mgr Marini who has the ability to control things whilst hardly being noticed.

At the end of Mass, and before the final blessing, the Holy Father delivered his Angelus address, normally given in St Peter's Square. Then the Angelus was recited in Latin. After a final hymn, an English version of the Te Deum was sung to a setting by Haydn. I would have much preferred it in Latin and plainchant.

The actual beatification ceremony was early in the Mass, just after the kyrie. It took the form of Archbishop Longley presenting the cause to the Holy Father, and the Holy Father giving his assent and declaring that the feast day would be 9th October. Then the relics of Cardinal Newman were presented to the Holy Father. Later Beatus Joannus Hinricus was invoked in the canon of the Mass.

After Mass, Pope Benedict was immediately taken to his next engagement. In the two hours that remained before our coach was due to depart, I walked through the crowd in the hope of spotting people I knew; and then purchased a sweatshirt as a memento of the occasion. We arrived back in Selby at 5.15, which was just nice time to get to York for Mass at 6.30.

The thing that impressed me most was the behaviour of the 50,000 or so people in the crowd. Before and during the Pope's arrival, the atmosphere was electric with wild shouting and cheering. As soon as Mass began, there was perfect silence. This is despite the congregation including mothers with babies, young families, youth groups and pensioners. It is a measure of the power of the Holy Father's presence, that he can engender such euphoria one moment and such prayerful attention the next. I doubt whether there is another man living who could do the same. 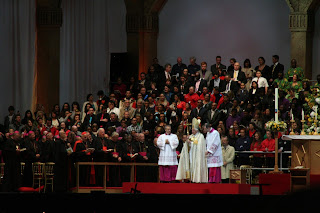 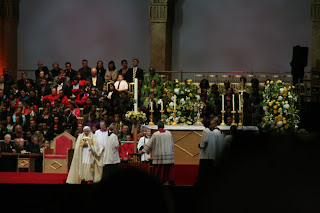 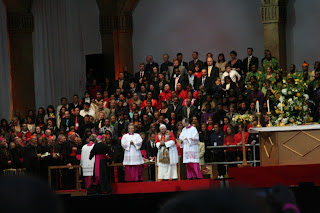 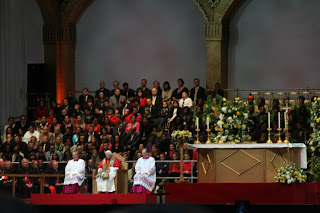 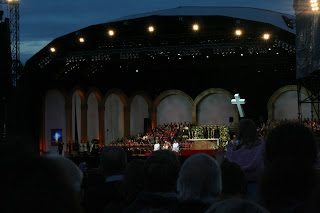 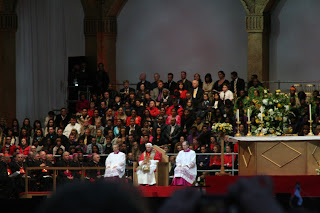 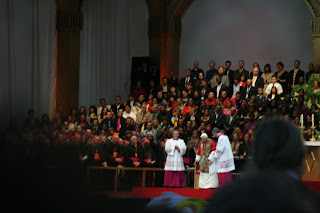 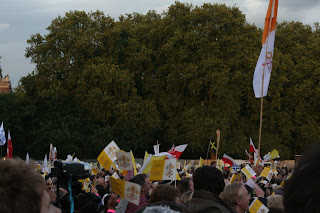 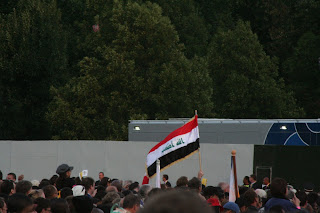 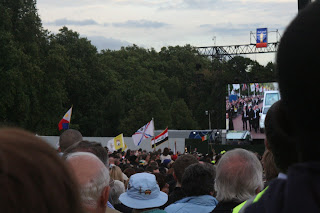 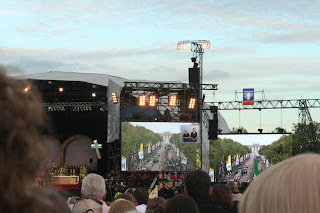 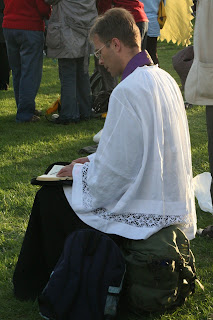 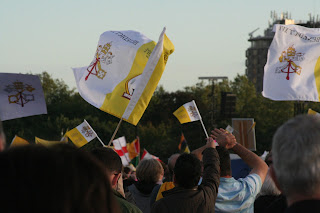 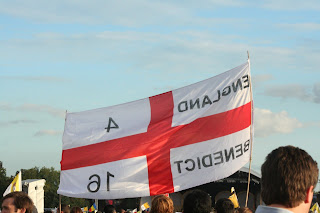 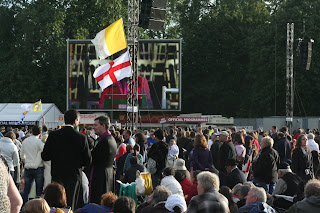 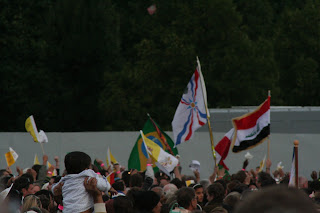 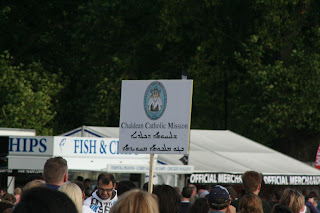 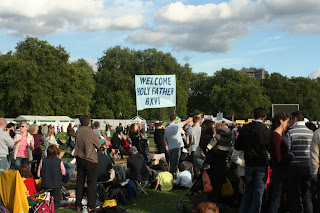 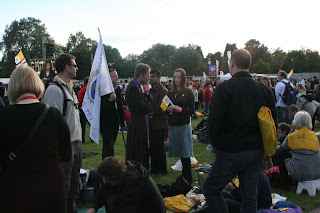 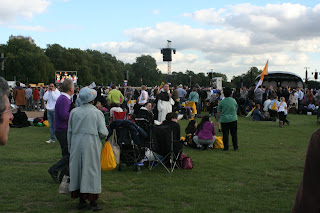 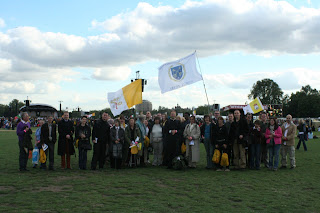 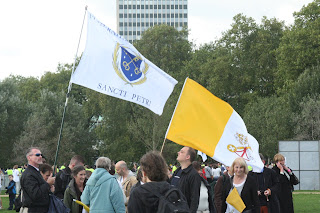 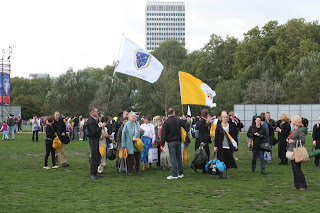 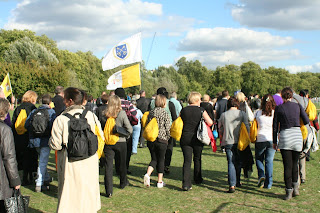 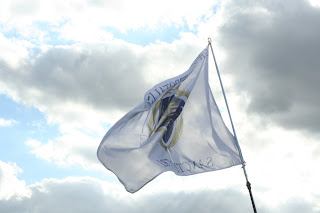 Posted by roydosan at 9:23 pm No comments:

Veneration of the True Cross

Yesterday evening, we had veneration of the true cross at the church of St Charles in Hull. That church is lucky to posess a fragment of the cross that St Helena found in the Holy Land and is believed to be the actual cross on which Our Lord hung. It is housed in a superb reliquary, and I hope that someone might be able to provide a photograph of this.

The veneration followed a Solemn Mass in the usus antiquior. A marvelous set of red High Mass vestments belonging to St charles Church was used; and, although incomplete, they looked very well in this ornate Georgean church. Music was provided by the Rudgate Singers, with Robert O'Farrell playing the organ.
Posted by Et Expecto at 1:01 pm No comments:

Paix Liturgique, the French organisation that has commissioned opinion surveys on the usus antiquior in several European countries, has conducted a poll in England, Scotland and Wales. The telephone survey was conducted between 21st and 28th June by Harris Interactive. 800 individuals, over the age of 18 and claiming to be Catholic, were identified from a sample of 6153.

The full results can be found on Rorate Caeli and other blogs. I will just highlight some of the findings.

Awareness of the Motu Proprio

Of the 800 Catholics, 60.6% said that they were unaware that it was permissible to celebrate Mass in the extraordinary, or more traditional Latin, form. Since the sample would have included many lapsed Catholics, this is not a surprising figure. However, when the figures for those who claim to attend Mass regularly (ie at least once per month) are analysed, 37.2% were still unaware.

The conclusion must be that a very poor job has been done of explaining the provisions of summorum pontificum and the rights it gives to ordinary members of the faithful.

The poll asked the question: Would you consider it normal or abnormal for both liturgical forms to be celebrated regularly in your parish? Again, taking those who attend Mass regularly (ie at least once per month), the replies were as follows:-

Perhaps the most interestying question was: If Mass were celebrated in Latin with Gregorian chant and in its extraordinary form in your parish, without taking the place of an ordinary one in English, how frequently would you attend it?

Again taking the replies of the practicing Catholics (ie those who attend Mass at least once per month), the answers were as follows:-

Of course what people say they would do in a poll and what people actually would do are different matters. Nevertheless, it cannot be denied that this survey reveals both acceptance and interest in the traditional form of Mass is widespread. Furthermore, the proportion of practicing Catholics who would oppose the introduction of of the usus antiquior into ordinary parish life is minimal.
Posted by Et Expecto at 10:06 am No comments: