Through the Streets of York 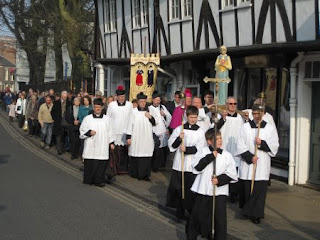 Roydosan put some photographs up of the Benediction which ended the York pilgrimage in honour of St Margaret Clitherow,  and Mike Forbester put up a selection which included both the Mass and the Benediction.  Here is a picture of the procession through the streets of York.
Posted by Et Expecto at 5:20 pm No comments:

Bishop Fernando Rifan, leader of the Apostolic Prelature of St John Vianny in Campos Brazil, will be visiting the British Isles during the Summer.  We are fortunate that he will be celebrating two Masses that may be convenient for people living in the north of England.

At 3pm on Saturday 30th June, there will be a Pontifical High Mass at the Church of the Immaculate Heart of Mary on Harrogate Road, Moortown, Leeds, LS17 6LE.

The following day, Sunday 1st July, Bishop Rifan will celebrate a Pontifical High Mass as part of the Latin Mass Society's annual pilgrimage to Holywell.  The Mass will be at 2.30pm in the church of St Winifrid and will be followed by a procession to St Winifrid's Well, where there will be devitions.  The day will end with Benediction in the church.

Bishop Rifan will then be travelling to Scotland and Ireland, before returning to London to attend and address the AGM of the Latin Mass Society on Saturday 7th July.  He will be celebrating Mass in St George's Cathedral, Southwark at 11am and the AGM will follow after a buffet lunch in the Amego Hall.  More about this later.
Posted by Et Expecto at 1:47 pm No comments:

In the last week or two, I have noticed a number of news items that indicate that the Catholic Church, and in particular Pope Benedict, are beginning to assert themselves in a much more confident way.  Credit for this new found confidence must, of course, go to our Holy Father, who has been showing some true leadership.  He has been a strong leader from the day that he was elected Pope, but, in many respects, the strength of his leadership is is only just beginning to be recognised.

Pope Benedict has acted decisively in the case of two of the leaders of the Association of Catholic Priests, a group of Irish priests holding heretical views.  He has also been very clear in his condemnation of a grouping of American nuns, also holding many heretical views, known as the the Leadership Conference of Women Religious.  Today, I have read of how Pope Benedict has written to the German bishops, leaving them in no doubt about the authentic way of translating the text of the Mass into the vernacular.  Apparently they have been arguing strongly for "pro multis" to be translated into the German equivalent of "for all".  It seems that they now recognise that sloppy translation will not do.

The interesting point is that, in these matters and in many others, the world is beginning to listen to Pope Benedict and hear what he is saying.  A few years ago, the world's media would have treated these actions with scorn, labelling the leader of the Cathol;ic Church out of touch and reactionary.  Some sections of the media still do, but it is noticeable that more and more commentators are showing respect towards the Holy Father.

I first noticed the assertiveness of Pope Benedict when he was in England, and giving his address to the Bishops of England and Wales at Oscott College on the final day of his visit.  He made two things very clear.  Firstly, he wanted the new translation of the missal into English to be received without controversy; and secondly, he wanted the Ordinariate, and the former Anglicans who would be joining it, to be welcomed into the Catholic Church.  The reservations that some bishops had about both these developments have now diminished; and the change of heart can be traced back to the Holy father's address.

So, both in matters of doctrine and liturgy, Pope Benedict's voice is beginning to be listened to and acted on.  Of course, he spoke out quite eloquently earlier in his reign about the older form of the Mass.  In those days, much of the Church, including many of its bishops, were happy to ignore the message, or even react against it.  This type of attitude is now changing.  On 24th March, both Bishop Davies and Bishop Drainey presided at Solemn Masses in the traditional form, and other bishops have done the same, or even been the celebrant.  Maybe, we can expect less opposition to the usus antiquior in future.
Posted by Et Expecto at 7:03 pm No comments: 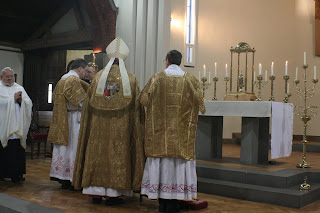 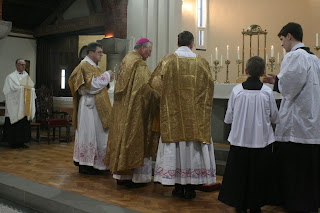 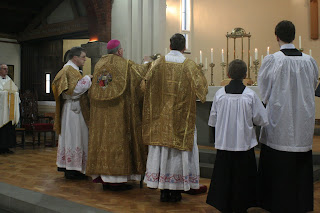 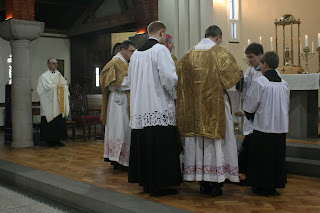 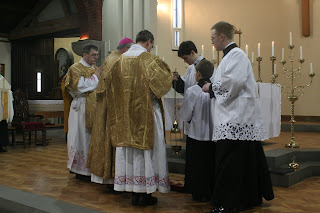 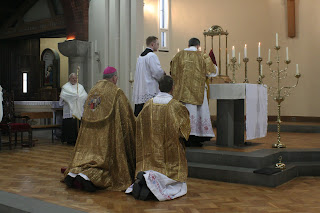 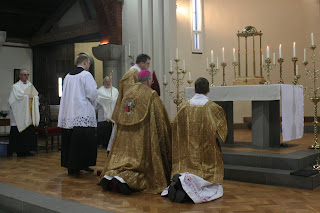 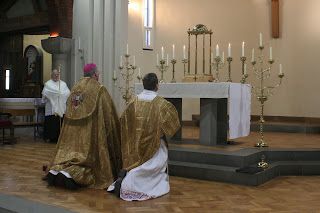 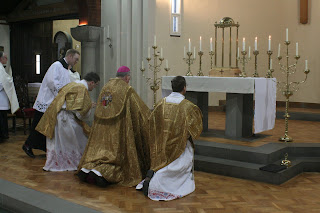 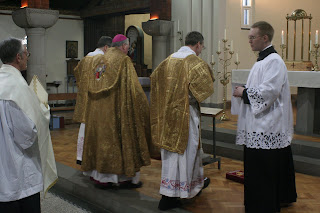 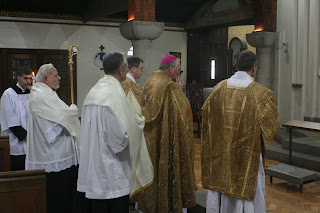 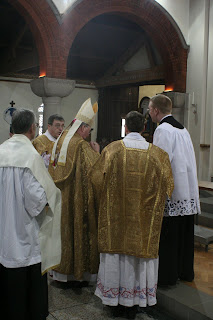 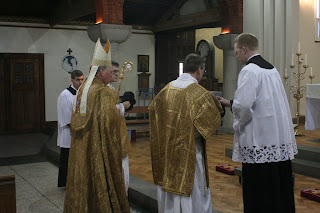 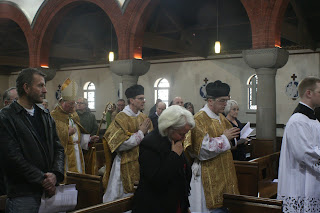 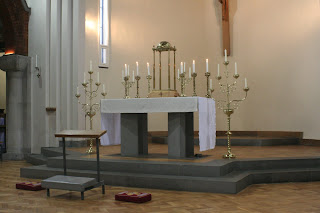 Posted by roydosan at 6:12 pm No comments:

Here is a link to some photos taken during the day.

No doubt there will be others in due course.
Posted by Mike Forbester at 11:14 am No comments:

The Latin Mass Society will be holding its third annual walking pilgrimage to Walsingham over the August Bank Holiday weekend.  Pilgrims will gather in Ely on the evening of Thursday 23rd August, and will walk the 55 miles, starting early on the Friday morning and arriving in Walsingham around mid-day on the Sunday.  There will be Mass each day, with the Saturday Mass celebrated at the private chapel of Oxborough Hall.

Overnight accommodation for men will probably be camping; women and families will have the benefit of being able to sleep in schools or halls.  Although the walking is arduous, it is within the capabilities of most people.  There will be support vehicles for anyone not able to walk the whole distance.

Last year, over thirty walked the distance.  This year, we are planning for sixty.  There is great commeraderie amongst the pilgrims, as well as plenty of hymn singing.  There are also opportunities for meditation, prayer and confession.  At least three priests are expected to take part.

Those who feel unable to walk the full distance can join the walk for the final day or go straight to Walsingham for the Mass which will be at 2pm at the shrine, after which we will process the Holy Mile to the grounds of the former abbey.

To book a place, go to the LMS website, where you can do it on line.
Posted by Et Expecto at 7:35 pm No comments: