Until recently, the Diocese of  Arlington in Virginia, USA made good provision for adherents of the older form of the Mass.  There were no less than 21 locations where it was offered, and these Masses were attended by about 2.5% of the Mass going population.   The Most Reverend Michael Burbidge, Bishop of Arlington, has implemented Traditionis Custodes in a very strict way, and the number of locations has been reduced to eight and will be further reduced to five in 2023.

One of the locations to be dropped is Holy Trinity parish in Gainsville, which was one of the best attended.  In its place, the diocese has offered the use of a disused gymnasium at a school in Nokesville.  Supporters of the Latin Mass have, in very short time, transformed this gymnasium into a chapel by constructing an altar with reredos and providing a sanctuary with altar rails.  They have also acquired benches from a disused church and redecorated throughout.  The result can be seen below. 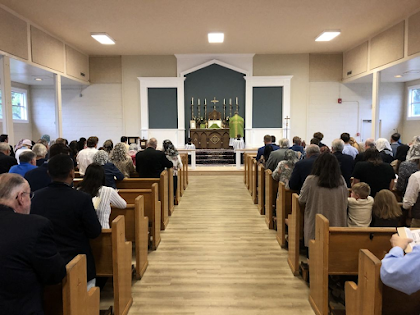 Two Latin Masses are now offered in the gymnesium every Sunday, and are attracting a congregation of over 200 at each.